I know it has been awhile. And a lot has happened since the last time I posted to my blog. I became quite ill last September/October and just now starting to feel a bit like my old self, but still have a long way to go. I went for an eye exam as I usually do every two years as I am really near sighted. My eye doctor told me to see my GP as I had a bleed on the back of my eye and from that moment things sort of snowballed. And I am now trying to get better or at least stable. I have stage 4 kidney failure. And my diet has played a big big part of my recovery. I found a wonderful website that helped me get my life back on track, much better than the dietician that I had who almost killed me with her lack of knowledge of my condition. https://www.davita.com/   I also ended up with a bleeding ulcer that put me into hospital again and I almost died from that visit. So I plan to eat better and watch my diet better so that I don't end up back in hospital, something I never want to experience again. Though it was the steroids I was on that caused the ulcer. Luckily I am now off those horrible things.
Anyway, yesterday I cooked some comfort foods from scratch. I have been finding it hard to stand and cook for any length of time, but I managed with a few breaks yesterday. First off I put in our roast gammon. I covered it with crushed pineapple, star anise and brown sugar. I then filled the pan about 1/2 way up with some cider and put it in the oven to roast. 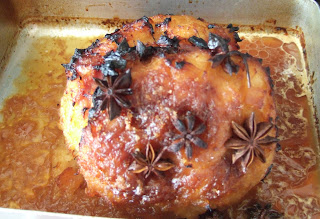 Next I decided to make my fav Zucchini/courgette recipe. I have an online shop that I can get some American products from and I had bought some Bisquick awhile back. So out came my trusty old Bisquick cookbook.... 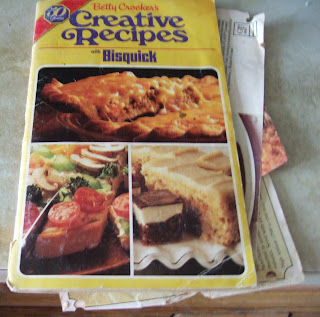 And I started slicing up my zucchini/courgettes, then the onions, herbs and seasonings... oil, eggs and cheese. Mixed it all up. 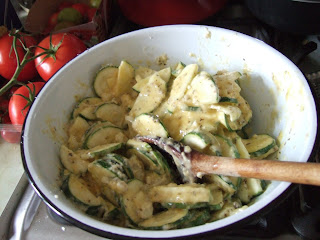 And stuck it in the oven to bake while the gammon was roasting. 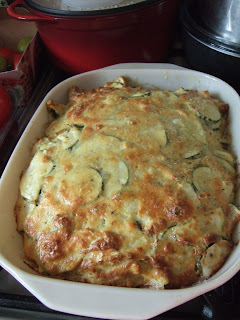 I love this dish hot, warm or cold the next day.(I have been eating it cold today.) YUM 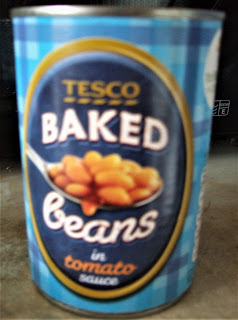 While all this was cooking I decided to do my version of Baked Beans. I have made them this way for over 30 years and they are my fav too. But when in a hurry it is usually just a tin of beans heated in a saucepan on the cooker/stove.  But when I want these this is how I do them.  I empty the tin of beans into a glass Pyrex dish with a lid. And per each tin of beans I add...... 1 tsp. mustard, 1 Tablespoon ketchup and about a Tablespoon or more of maple syrup and a good couple of Tablespoons of Brown sugar. Then I add some chopped onion. I love the onion so use a whole one. But you can add less if you like. Then it is into the microwave for 8 minutes at 50% power. Then take the lid off and put into the oven to finish off cooking about 1/2 hour.  Mine went in along with the roast gammon. 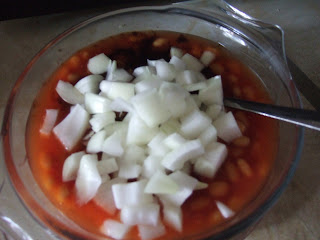 I like these beans cold the next day too. :) 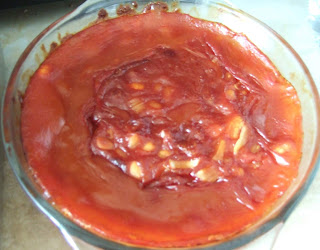 And to top it all off I made some of my stand by Mac and Cheese by good ole Kraft. 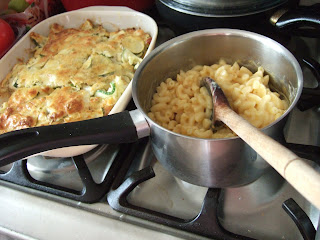 Now this is comfort food. :) 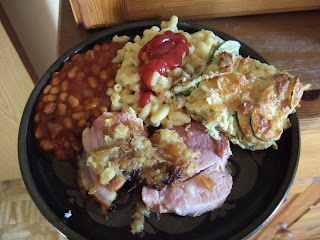 Bisquick Zucchini Appetizers(I eat as a side dish.)
3 cups thinly sliced unpared Zucchini(courgettes)
(about 4 small ones)
1 cup Bisquick baking mix
1/2 cup grated Parmesan Cheese ( I do a mix of parmesan and cheddar cheese)
1/2 cup finely chopped onion
2 tablespoons snipped parsley
1/2 tsp salt
1/2 tsp seasoned salt
1 tsp or more oregano
Dash of Pepper
1 clove of garlic, finely chopped
1/2 cup vegetable oil
4 eggs, slightly beaten
Heat oven to 350 degrees. Grease rectangular pan, 13x9x2 inches. Mix all ingredients; spread in pan. Bake until golden brown, about 25 minutes. Cut into rectangles, about 2x1 inch. Refrigerate any remaining appetizers.  4 dozen appetizers...... (I end up with about 12 squares).  I did cook mine a bit longer too. You want it to be good and golden brown on top. I also sprinkled a bit of cheese on top before baking.
Posted by Pat at 06:39 No comments: 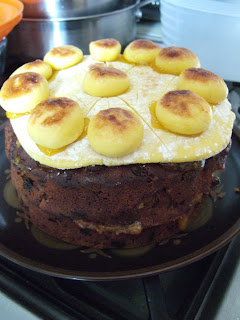 I have never tasted one of these cakes, or rather I didn't think I had ever tasted one before. And not being a religious sort of person, it wasn't a tradition in my cooking. The 11 marzipan balls on the top of this cake are supposed to represent the 11 apostles of Jesus, minus Judas. This cake is normally served around Easter time and traditionally on Mothering Sunday according to my cookbook. I used the recipe from the Best-Kept Secrets of the Women's Institute Cakes and Biscuits by Jill Brand. Before making the cake my friend Linda dropped by and we had a bit of a discussion about the marzipan in the middle of the cake. Linda said that it is baked in the middle and I said no it isn't. Well she is right and it is, but!!! I wish I had gone with my instincts and not. The middle layer of Marzipan, ends up being a rather gooey sticky toffee type of mess. I think I would have rather baked two layers and then stuck an unbaked layer of Marzipan in the middle. So I will give the recipe as to how I will be making it next time rather than this time.
Prepare two round cake tins with baking parchment. Or you could do it in a deep tin and then slice in half after it has cooled.
There is a recipe along with this one for making your own marzipan..... Well I cheated.  I bought my marzipan already made. Much easier and quicker than faffing about making it and it tastes lovely anyway,well I thought so(Linda hates Marzipan).
For the cake
175 g Raisins and  175 g Sultanas (to me they are almost the same so I used 350 grams sultanas)
80 g chopped glace cherries
80 g chopped walnut pieces
115 ml Guinness (stout) Brian enjoyed the rest after I made a cheese dip with some.
175g softened butter
175g soft dark brown sugar
3 eggs
Sieve this next bit all together 225 g. plain flour, 1/2 tsp. baking powder and 1 tsp ground mixed spice (I added a bit more spice)
To finish the cake you will also need some marzipan and some apricot jam(the recipe says sieved but I didn't do this)

First add the fruit and nuts and stout to a saucepan and gently heat till steaming with a cover on. Turn off the heat and let sit for an hour, so the fruit and nuts can soak up the stout.
Cream the butter and sugar together until light and fluffy. Gradually add in the eggs and beat well. Stir in the flour mixture and then stir in the fruit stout mixture.
Here is where I will differ with the recipe. It says to grease and line an 18cm(7inch) round cake tin and place only 1/2 the mix in and smooth the top. If you want the marzipan baked in the middle, then roll out a circle of marzipan and place on top, otherwise just fill the tin with the cake mix if you plan to slice and add marzipan or you could have without. Or you could use two cake tins.
Bake at Gas mark 3/ electric oven 160C/ Fan oven 140C for 2 -2 1/2 hours. (I have never ever baked a cake for this amount of time!!!) You will need to test the cake to see if it is done, by inserting a wooden skewer into it and if it comes out clean it is done. By using the two cake tins your baking time will need to be slightly adjusted. So I would test after an hour or hour and 1/2 baking and then afterwards.
Leave your cake or cakes to cool for 15minutes in the tin before turning out onto a wire rack to cool.
When the cake is cold, you can remove the paper lining and if two then assemble using some apricot jam brushed on the bottom and then a layer of marzipan and then more jam to sandwich between the cake layers. One whole cake then slice in half and then assemble. Or just leave as is and only layer the marzipan on the top.
On the top of the cake brush with the Sieved Jam and then add a circle of marzipan. Score the top making a diamond pattern and brush with egg white. Take the rest of the marzipan and make eleven even sized balls and press around the rim of the top of the cake. Brush again with egg white.  Next place the cake under a preheated grill and toast gently until the marzipan is a light golden brown. They sprinkled powder sugar on their cake afterwards, but I preferred mine without. I also didn't use the egg white, instead I used more apricot jam to hold the balls on top of the cake. Like I said I am not a religious type of person, so I arranged my balls differently, though I did stick to the traditional 11.
And as for being my first Simnel cake. I faintly remember this cake or one very very similar to it from my childhood.... My dad and step moms wedding cake. It had marzipan and the cake flavour was very much similar to this one.
Posted by Pat at 03:34 1 comment:

Pat
I am an American living in Britain (dual citizen) married to a lovely Brit who I met via the Internet. We are owned at this point in time by one lovely cat, Jingles. We have a little garden that is packed with flowers and veggies. Our moto for life is that it is too short so enjoy every moment while we can.

You can visit my other blogs at...
Main blog